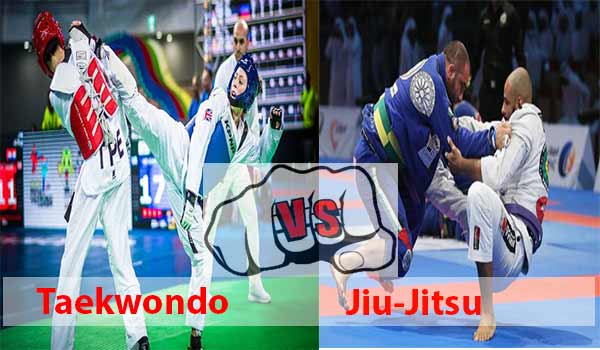 Taekwondo Vs. Jiu-Jitsu: Which Is Better for Self Defence?

Being as popular as they are, it is hard to not know the names of the two most popular martial arts across the globe.

Taekwondo and Jiu-jitsu are popular because of their efficient fighting technique when used against an opponent.

I am a big fan of martial arts and always wanted to learn some form of it for self-defense.

My house falls in a shady neighbourhood and there is always a chance that harm might come in my direction.

This situation forced me to wonder "Which fighting technique between Taekwondo and Jiu-jitsu would be best for self-defense?".

Doing my research, I managed to find the optimum answer for my question. Let’s discuss the details below.

Taekwondo or also known as Tae Kwon Do is the martial arts for self-defense. This particular form of martial arts was originated in Korea.

The name was selected for the art because the name complimented everything that the art was all about. Tae means foot, Kwon means hand and Do means art.

Being over 2000 years old, this form or defensive martial arts is considered to be one of the oldest one among the bunch.

An archaeologist discovered a tomb build between 37BC-66AD where a drawing was found. In the picture, two unarmed men can be seen both taking stances which are commonly used in Taekwondo.

What made archaeologist more baffled was the fact that the men in the drawing were both wearing uniform similar to what can be seen in Taekwondo today.

This hits on how old the martial art technique is. Tae Kwon Do began to develop as Korea began to advance.

A kingdom in Korea named Silla is the place where the most highly skilled Taekwondo warriors were made.

This was due to the fact that being a tiny kingdom the area was always under threat from the outside world.

The Hwarang people were training not only in self-defense but also improvement of character, self-discipline, and confidence. This is something that is still seen today at modern day Taekwondo.

Late with the end of Silla Dynasty, it came the Koryo dynasty. This is known as Korea in modern times. The royal family back in the Koryo dynasty appreciated the form of martial arts and used to sponsor events related to the art.

Thus, drilling the form of Martial arts in the culture of Korea.

>> Some Ideas For Beginners Boxing

Now that we have an idea of how the martial arts originated, let us learn the details of what the teachings are.

Tae kwon do is a form of martial arts that focuses on punches, kicks, and blocks. This style of art is known as the "Hand Style."

Kicks are something that Taekwondo focuses a lot more. In taekwondo, there is a move called the roundhouse kick; this involves kicking your opponent with the top of your leg at inhuman speeds.

If executed correctly, this move is strong enough to cause a severe brain hemorrhage.

Footwork is the area of focus here. If you are planning to enter this form of martial arts, then you have to be prepared for a lot of training which involve moving your leg and kicking.

Jiu-jitsu is a Japanese martial arts form which originated in Japan. It is also known as jujutsu. Ju roughly translates to “Gentle” and Jitsu translates to "Art."

This form of martial arts is also old, but the exact date of origin is unknown. Jiu-jitsu is believed to be as old as taekwondo although evidence points in the other direction.

Muromachi period lasted from 1333 to 1573 in Japan. And in this period, Jujutsu was trained to lightly armed warriors.

They have trained this art to defend themselves against heavy armoured warriors.

The teaching involved grappling, throwing, resisting and disarming. One thing leads to the other, and eventually, Japanese Samurais were taught in the art.

Anything related to grappling disciplines in Japan was referred to as jujutsu, this was around the 17th century.

Jujutsu became popular among samurais due to its non-aggressive nature and its effectiveness when applied.

Since then, jujutsu has been changed to improve its ability to overpower a person in everyday clothing. This is because no one wears Armor this days.

Jujutsu focuses on Grappling, throwing, locks, binding enemies and so on. This form of martial art is made for pure defense purpose.

Do not underestimate this form of martial arts just because it doesn't focus on striking your opponent.

Skilled jujutsu person can subdue any form of attack coming his way. As you get more disciplined in the art, you will be able to use your clothes as weapons to neutralize your attacker.

Both forms of martial arts have their own strong and weak zones. They both are more than capable of keeping their user safe from harm's way.

However, it all comes to your taste and your choice.

In taekwondo, you will be focusing a lot more in striking your opponent which requires you to land kicks shoulder high.

Even experts in this line run risks of injuring themselves if the kicks go waist high.

I was looking for something that will keep me safe and requires a lot less training. Jiu-Jitsu was the winner here for me.

It’s not like taekwondo is incapable of subduing enemies, its more than capable of that. It’s just that it requires a lot more time to perfect than I would like to invest.

It is much easier to exploit weak spots and joints than practicing striking someone. If your attacker is taken by surprise using jujutsu, you can quickly out muscle him by using simple techniques which can be learned very easily.

Both forms of martial arts are exceptional in their way, but at the end of the day, it all comes to you.

If you are ok with investing several months into the development of your skills, then you should opt for taekwondo.

But if you are like me who wants to be able to defend himself but want to invest less time in the learning process, than jujutsu is the way to go.

>> Get A Good Quality Best Outdoor Basketball From Our List