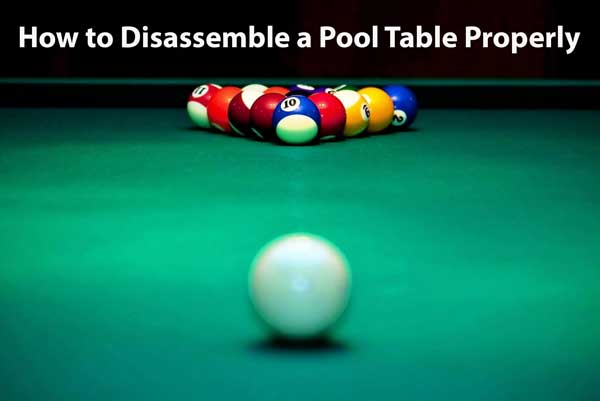 How to Disassemble a Pool Table Properly

Moving a pool table can be a strenuous job and thus requires the right tools, as well as the right know-how.

Just like any other equipment in the house, a pool table needs to be handled with care when disassembling it. Due to its enormous size and weight, it is not easy to move the pool table around, and thus it should be dismantled.

When do we disassemble a pool table? For those who offer entertainment in social places such as sports bars whether buying or simply relocating, they need to disassemble the pool table to ease in the move.

If the adequate steps and tools are used, a pool table can be disassembled with ease and in a short period of time.

There are a few steps one should follow in doing so. For your ease, here they are;

Step By Step How to Disassemble a Pool Table

The first step is to detach the pockets from the table. The pocket liners if present are first removed. After this, the screws or staples that are used to attach the pocket are then removed.

Now, you can do it using a staple remover or a simple screwdriver depending on each. Lie on your back under the table; remove all the staples or screws holding the pockets in place.

This process is a bit hard and dangerous thus one is required to put on goggles to protect their eyes from falling staples. The pockets can either be removed and stored away or left in place.

The second step is to remove the rail bolts from underneath each rail. Usually, there are three to four bolts under each rail. A socket wrench should do the trick.

Some old pool tables may have special bolts with two holes. Removing such requires a forked tool from a pool table supply store. Once you have removed the bolts from each rail, place them inside a Ziploc bag so as to avoid losing them.

Lift the rails as one piece. Well, this will rely on the design of the pool table as other have two horseshoe-shaped rails on either side, which require to be lifted separately.

Typically, there are three distinct types of railings on pool tables. These pieces are quite heavy, so take caution when flipping them over to avoid breaking the side pockets.

3. Removing the Rails and Pocket

The third step involves removing the rails and the pockets. Detach the rails and place them aside.  At the corner where the two rails are attached, flip them over on to the table with another person’s help.

While at it, set aside pockets as well. To avoid bashing the side pockets, set the rails down carefully.

Detaching the felt from the slate bed is the fourth step. The felt is the cloth that covers the hard rock layer beneath. This cloth may be glued or stapled to the slate.

One should be able to determine if stapled or glued ahead of time, so as to prepare the appropriate tool. If the felt is glued, one should peel it off using the backward hand motion a little at a time.

Pulling it upwards or forward has an increased tendency for the felt to stretch creating bulges. If stapled, one should be careful to avoid tears.

Fold the felt carefully once removed to avoid wrinkles and creases. Also, one should avoid pressing on the fold lines as this could create lines on the felt when reattached to the pool table affecting its effect and function during the game.

The felt should be as smooth as possible.

>> Lists of Best Pool Chalk For You

>> Some Ideas For Billiards and Pool

At number five, remove the slate. The slate may be one giant piece or three pieces. This slate screws can be easily removed using a drill. Be careful in this step as the slate is one of the most critical parts of the pool table.
The screw head is more often than not covered with beeswax. This is done to create an even surface above the screw. The wax can easily be scraped off using the flat edge of the screwdriver to give direct access to the screw.
Get a few friends and remove each slate carefully. Each slate weighs about 110kg. Avoid chipping or scratching the slate as replacing it is quite expensive.

The sixth step involves removing the legs. For easy moving, one should remove the legs by unscrewing them otherwise this process is not essential.

Transporting or moving the slate is the most difficult part. This is because the slate is not only heavy, but it is also very fragile. Carefully place the slate in the truck and strap it in using a furniture strap.

Be keen on climate change. The slate should be placed in a climate controlled storage unit.

For a non-slate table, only the rails and the legs should be removed. The rails can similarly be removed with a socket wrench. For the two lengths of a rail, the table is to be flipped over and the rails gently detached.

While at it, unbolt the legs. Sit and wait for professional help as an attempt to disassemble the rest of a coin-operated machine may lead to difficulty in reassembling it.

Caution is key when disassembling the ball return system pool table. Such tables are coin-operated and have a difficult procedure of disassembly. Removing the mechanism without damaging the table is close to impossible.

Thus, not unless one has a manual for such a model, they should seek the services of a professional.

For the pool tables whose surface is made from fiberboard, wood or any other non-slate material, they are normally not meant to be disassembled. It is usually a low-cost disposable and should be transported in one piece.

Some of these tables even come with folding legs to ease the transportation process.

The pool table offers great entertainment and you should, therefore, handled with care. It is also quite expensive. Caution should be taken when disassembling the table, as any mistake will defiantly affect he reassemble process and eventually the end result.

The bolts should be kept safe, and care should be taken on the felt as it is one of the most precious parts of the table. Also, handle the slate with care.

Disassembling a pool table can be fun and easy if one is aware of what they are doing. You cannot stress caution enough when it comes to handling the pool table.

>> What To Look Before Purchase Portable Basketball Hoop?

>> Which Best Spinning Tops Perfect For You? Answered