Turkey hunting can be exciting or disappointing depending on the type of gobble call you use and how you use it.

Using the best gobble call to hunt not only catches the attention of these birds but it also gets you closer to making a successful kill.

But what is a gobble call? This is a device that imitates turkeys. It is designed in a way that can vocalize sounds produced by turkeys.

Henry Gibson was the brain behind this invention. He came up with the first turkey gobble call.

Well, if you’re out shopping for a gobble call, you don’t have to get lost in the sea of options available. Avoid getting the wrong thing by going through my little guide below.

I will talk about some of the top-rated units people tend to go for and leave you to judge if they’re for you.

Gobble calls are essential during turkey hunting. They make a turkey think that there is another turkey close by. It then moves closer to the hunter.

Here are the reasons why I think these devices are great for turkey hunting:

Well, here are the options you might want to check out:

Our Best Gobble Calls In The Money 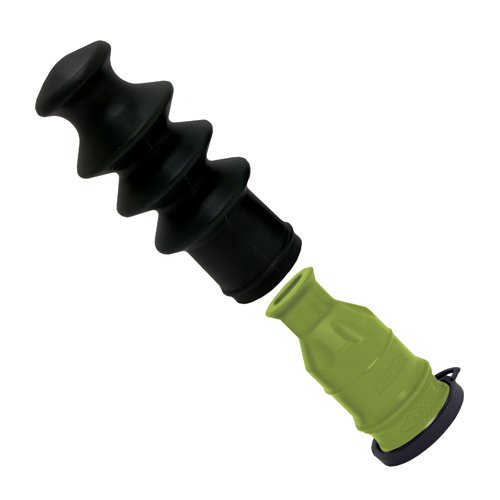 Just as the name suggests, a primos 274 double gobble, can be used in two ways. It can either be used using the hands or operated using the mouth. This gobble call is used to call in Toms or locate where they are.

The ability to use double gobble in two different ways makes it possible for people who are not able to operate it using the hands to create turkeys gobble calls using the mouth.

This turkey gobble call produces mature and Jake gobbles effortlessly by attaching a bellow tube into the mouthpiece. The bellow tube is removable.

It is affordable and well packed. Some cost less than 30 dollars. It is also effective irrespective of the method used to produce turkey gobbles. The device produces clear sounds.

When you hold it using one hand and pump using the other it produces mature gobbles.

It has a patented silencer cap that silences any accidental calls.

You can use the gobble to produce a Jake gobble. This will make a large Tom think that a young male is invading its territory and come in ready to attack.

Although it is easy to use a primos 274 double gobble, you have to practice regularly to understand how it is used. You also have to know how a gobble sounds like for you to imitate it.

The removable bellows make it more diverse. Some of them have black and green colors. 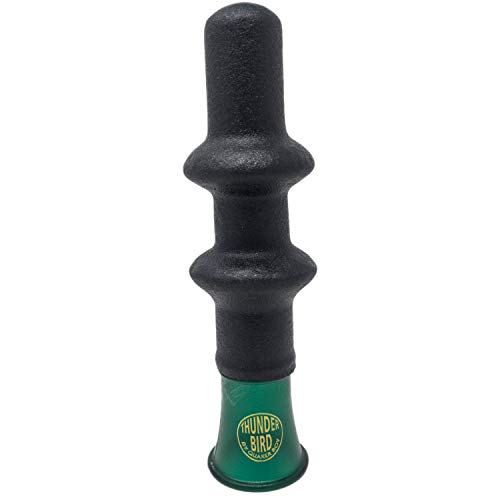 The Quaker Boy – Thunderbird Gobble Shaker is the best turkey gobble call. It is high – pitched and also easy to use.

The fact that it is loud enough makes it more effective. It can help you locate an old Tom.

A Quaker Boy – Thunder Gobble Shaker is easy to carry and operate. It is more effective when used early in the morning when turkeys are coming out of the roost or late in the evening.

It has a removable soundproof cap that prevents it from making any noises when you are walking in the woods or when it is not in use.

Quaker Boy – Thunder Gobble Shaker is made of rubber and plastic. Some of them have black and green colors. The upper part is black while the lower part is colored green.

If you are looking for the best gobble call, then consider buying an H.S Strut Hunters Specialties Thunder Twister Gobble Locator Call.  It has audible and authentic gobble sounds.

Apart from its audibility, it is easy to use. The device is loud enough. It can call in a gobble from a distance.

It has a unique cap dubbed twist on the silencer. The cap is closed and opened by twisting. It prevents the gobble call from making any unnecessary noises when it is not in use. It also has improved camo color bellows with infinity latex. Its camo bellows produce loud volume and clear sounds.

This gobble call has an infinity latex reed that lasts long.

Just like so many gobble calls. H.S Hunters Specialties Thunder Twister Gobble Locator Call is made of both rubber and plastic.

It can be operated using one or both hands. If you are using one hand, hold half the cap and half the rubber end and shake it back and forth as hard and as fast as you can.

If you are using two hands, hold the cap using one hand and push the other end back and forth using the other. Ensure the cap is open. You can use it together with some hen yelps to make gobblers curious. This way it will call in Toms very easily.

This gobble locator call is affordable. Some cost less than 30 dollars. 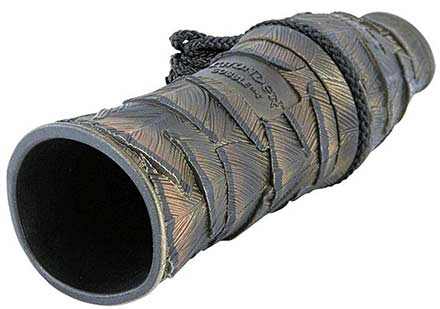 After trying to master how to use several gobble calls, I found myself confused. I did not know how to effectively use any of them. Then I met my friend who is a professional turkey hunter. He recommended that I try out a Flextone Magnum Thunder Gobble.

When I purchased it, I was shocked by how easy I learned how to use it. You can learn how to use it in just a few minutes. However, you have to practice to perfect the art of creating excellent turkey gobbles.

The device creates mature gobbles. This makes it easy to locate and challenge Toms

Flextone Magnum Thunder Gobble is a great locator designed for long and short-range calling. Its long body and thick reeds enable it to produce loud and deep gobble calls.

The gobble call has an ergonomic mouthpiece together with a well-constructed and designed reed. They make it possible for the user to control it. You can adjust the terms, tone, volume, and rhythm.

To add realism to the turkey gobble calls, you can add some hen yelps to the calling sequences.

This gobble call can even catch the attention of call shy gobblers and call them in. It has realistic gobble calls.

When blown at a very low volume, it produces a kee – kee sound. This sound is produced by young turkeys when they get lost; they are looking for their mothers.

They have a good appearance. Some cost less than 20 dollars.

After using several turkey calls, I got tired of using mouth operated gobble calls. My friend introduced me to a mantis 25 electronic turkey call.

Mantis 25 electronic turkey call is different. Its unique features set it apart from all other gobble calls.

It is preloaded with 25 different turkey calls that have a 105 DB sound output. Apart from that, it also has a keypad section made of rubber. The section allows you to use it easily and to adjust the volume.

The device has a backlight for easy movement in areas with little or no light. It does not only produce gobble sounds but also yelps, cackles, split and drum calls and many more.

To use, you have to select the sound you want to use. Press the sound activation button for the call to start. Then use the right arrow on the keypad to increase the volume and the left arrow to decrease it.

The device has supporting legs and lock in position. It also has an option for selecting the number of times that you would like the sound to be repeated.

If you are an amateur with no experience on how to use gobble calls. A mantis 25 electronic turkey call will help.

This call has crystal clear calls. Apart from turkey gobble calls, it also has sounds from other birds such as crow calls, coyote howl, and whistle contented purrs. All the sounds were recorded by Paul “the Maestro” Butski.

It uses 4AAA batteries. It also has a readout LCD screen.

When I first went out shopping for a gobble call, I had little knowledge about the best gobble call on the market. I visited several shops seeking advice on which turkey gobble call would work best.

One retailer was honest enough. He explained to me that gobble calls are different. He advised me to try out a few.

Although gobble calls carry out the same task, they are structured differently. There are so many gobble calls in the market.

There are several factors to consider before purchasing a gobble call.

Turkeys behave in different ways during the year. During the mating seasons, they are busy seeking for partners. It is essential to consider the season before purchasing a gobble call.

If you plan to hunt during all seasons, use a locator call. If you are hunting during spring, look for a gobble call that imitates female birds looking for Toms.

During the fall season, use a gobble call with an old female turkey sound. Most females look for other turkeys at this time.

If you have little knowledge about gobble calls, start with electronic calls. Then gradually study how the rest are used and purchase the one you like.

The time you take to learn how to use gobble calls differs. Some are more technical and they require more time to learn.

Purchases effective gobble calls. They should have great sounds and volume control.

Time Of The Day

The time of the day also affects the type of call you use.

Calls with sounds of turkeys looking for mates, work best in the morning. Locator calls are more effective in the evening.

When purchasing a gobble call, consider the time of day that you will be hunting.

It is also wise to try out a few and get to know how they are used and when they are effective.

Gobble calls are different some are more effective than others.

Before purchasing a gobble call, it is good to learn about several sounds produced by turkeys. Gobbles, yelps, and clucks are the most common. Turkeys produce close to 30 different sounds. It is wise to familiarize yourself with just a few before you learn the rest.

Gobble calls are structured differently. They are made of plastic and rubber. Mouth operated gobble calls are convenient as they leave your hands free, this way you can easily hold a gun and shot.

Tips On How To Use Gobble Calls

After purchasing a gobble call, make sure you practice as many times as you can. Avoid practicing in the woods as the turkeys may familiarize themselves with the sounds and fail to show up during hunting.

What is a gobble call?

What is the best time to use a gobble call?

How to use a gobble call?

Gobble calls are used differently some are operated using the mouth while others are handled using the hands. It is always good to check for tutorials on how a gobble call is used before buying it.

What types of sounds do gobble calls produce?

Factors to consider before buying a gobble call?

Before purchasing a gobble call, you should consider the season, efficiency, and the time of day that you out go hunting.

Turkeys not only have a strong vision but they can also camouflage their body from head to toe. Turkey hunting requires both skill and use of the best gobble calls to bag a bird.

As I have said, remember not to make so many unnecessary sounds when hunting turkeys. You can combine turkey gobbles together with other sounds such as yelps and cackles to raise the curiosity of the gobbler. It will feel like there is something it is missing out.

Bird hunting can be adventurous. Great hunters learn every time they go out hunting. Take notes every time you learn something and embrace failure. Learn from your mistakes.

If you use the best turkey gobble calls, turkey hunting will not only be fun but also successful.